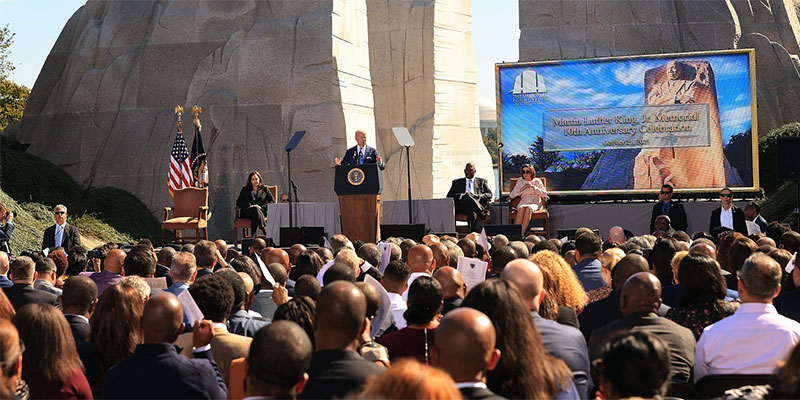 The National Association of REALTORS® joined The Memorial Foundation this week to commemorate the 10th anniversary of the Martin Luther King, Jr. Memorial in Washington, D.C. Nearly 20 NAR representatives, including CEO Bob Goldberg and President Charlie Oppler, attended an anniversary dinner Wednesday, where the association was recognized among other memorial sponsors. NAR was one of the first organizations to support the memorial’s construction, donating $1 million to the project in early 2007. The memorial opened to the public in 2011.

“For 10 years, the Martin Luther King, Jr. Memorial has inspired millions of visitors with Dr. King’s vision for a more equitable nation, which includes everyone having the right to live where they choose,” Oppler said. “Today, as Dr. King called us to do, REALTORS® are leading the fight for fair housing and helping to build diverse, inclusive communities.”

U.S. Vice President Kamala Harris was a guest of honor at the dinner, which also celebrated the Memorial Foundation’s Social Justice Fellows, a program sponsored by NAR to develop young leaders.

On Thursday, NAR leaders joined U.S. President Joe Biden, Harris, and other dignitaries for an anniversary ceremony at the memorial on the National Mall. “We’re aggressively—with the leadership of some of the people I’m looking at right now—combating housing discrimination to create a generation of wealth,” Biden said. “How did every other person make it to the middle class from a working class circumstance? Just like my dad did: built equity in a house.”

Oppler said REALTORS® are an invaluable resource in the fight for housing equity, noting that NAR’s contribution to the memorial is engraved into the façade. “Seeing REALTORS® etched in stone at the memorial is an incredible reminder of how far we’ve come,” he added, “and an even bigger reminder of how far we have to go. Our 1.5 million members are working every day to help all people achieve their American dream.”

No Relief in Shortages of Appliances, Furniture